ISABEL STRODE AROUND her shop, as she always did at closing time, touching the crystals and feathers, inhaling the fragrances of the incense sticks, surveying the books still on the shelves. Everything was in order, as it usually was; so, she returned to the back room to fetch her coat and hat, mittens and purse.

It was snowing again, and the lacy flakes glistened as they fell through the beams of the streetlights and shop lights and the colourful glow of the Christmas bulbs that shone around windows and brightened rooflines. Shoppers had gone home and stores had closed along the avenues and lanes, leaving a hush in the air that felt sacred, tonight. But when she passed a corner off the boutique strip where she had had the good fortune to locate her business, she heard distant music.

At once, she turned into the unfamiliar street and began to scan the storefronts, looking for the source of the carols sung by musicians old and new. Dark window after dark window evinced no sign of revelry, but when she reached the next intersection, the music came louder when a door ahead opened.

She had lived and worked in the city three years, but she had never explored this particular district before. Curious, she picked up her pace to find a small pub bearing an old-fashioned hanging sign depicting a lion against a background saltire. The words on the ledger board read The Scot’s Meow. Giggling at the name the proprietor had given the establishment, she opened the door and stepped into a warm snug sparkling with glass and waxed wood and smelling of beer and whisky.

Bing Crosby sang White Christmas in the background as patrons added their voices to the traditional rendition, some of them off key. Humming along, Isabel walked to the bar and sat on a stool at the near end, between a trio of chatting middle-aged women and a grizzled man with a smooth baritone.

She returned the smile of the ginger-haired bartender. “The tamest brew you have,” she said. “I’m not much of a drinker.”

“Eggnog, it is,” he replied, his grin broadening. He fetched a glass from a shelf beside the mirror behind the bar, and a carton from the refrigerator below. Pouring as he turned, he placed the tall tumbler before her and said, “First one’s on the house. Merry Christmas to ye.”

“Thank you!” she exclaimed, taken by surprise.

The man next to her interrupted his crooning to grouse, “Oy. Ye didna give me a free one.”

The ginger whose nametag read Donny affected a broad accent as he retorted, “Ye’re no’ as bonny as the lass, Angus. But I recall ye got yer share o’ free drink when first ye darkened me door, and dinna deny it.”

“Aye, well, that’s true.” The baritone admitted. Turning to Isabel, he inquired. “Is it yer first time, then?”

“As a matter of fact it is,” she replied. “The carols drew me.” With a chuckle, she added, “And the name over the door pulled me in.”

“It is clever isn’t it?” commented the woman to her right with a tipsy giggle.

“It’s the cat’s meow,” said her companion on the end, and all three women burst into gales of laughter.

Donny raised he brows at them as they settled and he remarked, “I think Cat’s had more’n enough to drink tonight, aye?”

Again the women squealed and chortled. Through shrill titters the nearest answered, “I’m not drivin’, Donny, an’ Lorna’s payin’ ’cause it’s my birthday; so, pour away.” With that, she downed the last drops of her whisky and plonked her empty glass on the bar.

Shaking his head, the bartender filled it once more. But he queried, “So, Lorna, are ye drivin’, then?”

“All right, then,” he said, and he poured for the other two as well.

“While ye’re at it, lad,” Angus called, holding up his stein, and Donny dutifully gave him another ale.

PLEASANT AS THE COMPANY was, Isabel nursed and sipped her second eggnog only a half hour, long enough to join in with the revellers to sing three tunes, before she called it a night and headed home.

In her loft overlooking a small flagstone-floored courtyard lined with planters and surrounded by brick apartment buildings, she gazed at the blowing snow and reflected that she had chosen well in coming to this city. She had established her business, made a few good friends, and created a cosy home.

But is that all ye want?

She whirled at the voice that had popped into her mind and she scanned her parlour.

“Who’s there?” she murmured as she peered intently and stretched out her senses to detect an intruder.

After several minutes’ scrutiny, she frowned, wondering if she might have imagined the voice. Could it simply have been her own internal critic prompting her to examine her life and her goals more closely?

But her inner voice had never before spoken with an accent. On the other hand, she had been hearing Scottish accents all evening and she had always liked that particular manner of speech.

Uncertain, she searched her home once more and, when she found no evidence of an unwanted visitor, she drew a bath; soaked in Epsom salts awhile, just in case; and then went to bed.

Available through links below. 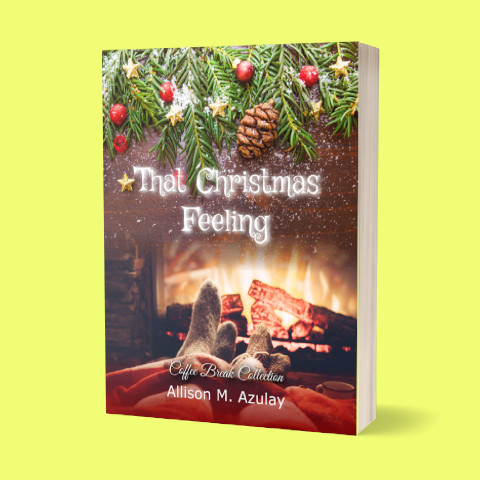 Not published in digital format, Christmas Presence is included in the first of the Coffee Break Collection series.

Find it at Barnes & Noble or a local retailer using IngramSpark’s iPage.