My name is Demona and I live in Hell. No, not that one. The other one. The actual town. Yes, that is its name. And yeah, it gets pretty hot. And pretty cold. Though not usually on the same day.

Never heard of it? I’m not surprised. We’re not on maps. Not even on Google. Nobody comes here on purpose. People just drift into this bowl-shaped valley by accident, lost on their way to somewhere else. A few settle; some families have been here for generations. But most leave as soon as they get directions to wherever they’re headed, or stay a few months or a few years and then move on when they can. Even our mail has to be fetched by locals because the Postal Service can’t quite figure out who we are or where we are.

My great-grandmother says it’s all because this valley is a power point. One of many on the planet, apparently, but most don’t have the special weirdness that exists here: like the world sort of hides us away, not only tucking us into a remote dale surrounded by wooded hills, but covering us with a kind of ethereal shroud that even satellites can’t penetrate. GPS doesn’t work at all in Hell. Nor do cell phones. And internet can only be accessed through buried wires or cables and only when there’s a storm.

Funny thing is a highway comes by here. Granddad Max used to say it “kisses” the valley. He meant it passes by but only connects by way of a side road. Nevertheless, people wander through all the time, which is why we have a sizable population, albeit one that shifts with the frequent income and outgo of outsiders. They’re drawn here, Gran says. And that’s how people describe it, when you ask them: They just had an urge to turn off and look for a gas station or a restaurant or to see what lay beyond that ridge. Now, here they are.

Me, I was born here. I could leave, maybe move to some normal place. Or maybe someplace foreign. I’ve visited quite a few: even Paris and London and Hong Kong. Moscow was cool, too, though I didn’t stay long because Mom called me back. (She gets excited when I teleport myself. Or start a fire in the woodstove without using a match. Or levitate to reach the upper cupboards. The Power skipped Mom’s generation; so, it freaks her out when I do stuff she can’t. Of course, it doesn’t help that I set a babysitter’s shoes on fire when I was three. Never did like that woman. I hear she lit out of town that very night. Being a babysitter can be hazardous in Hell.)

Texas. I’d been contemplating the possibility of making a home there, maybe getting a regular job, because I’d found a romance novel in the dead-mail pile where I worked in the Post Office section (cupboard, really) of Sabrina’s Gift Shop and Potion Emporium. Cousin Sabrina thought I was crazy, wanting to leave the valley. So did Gran. Mom, on the other hand, had not-so-secretly started packing.

Then, he came into the shop: an honest-to-God cowboy complete with Western hat and shirt, faded jeans, and boots just like in the movies Mr. Honeycutt manages to get for his little theatre next to the library and laundromat. I was handling the front cash because Sabrina was in back working on a new potion. I took one look at the tall, dark, handsome stranger whose high cheekbones and deep tan fairly screamed native heritage and I just knew this was the man for me.

“Can I help you?” I asked with my brightest smile and hoping he didn’t mind my freckles and the flaming red of my hair.

He glanced up from where he’d been perusing the bottles on the table marked Shaving Lotions and looked me over in a way that sent tingles all through me. No guy had ever looked at me like that before, and my heart started fluttering wildly.

“Y’all got any shampoo?” he asked in a lazy sort of drawl that I was sure came from one of those exotic places like San Antonio or Houston.

“Over here,” I answered, pointing to the table directly in front of the service desk. So thrilled I nearly tripped, I rushed out from behind the counter to show him all we had to offer. “This is for oily hair,” I explained, holding up a sample of each product as I spoke. “This for dry. The green one is for specially dusty or dirty hair: you know, for someone who’s been working hard.”

With a wave, I added superfluously, for I knew he would not need them, “Those are for people who are balding, and those for the sort who just want to grow it out quickly—like if they hate their latest haircut.”

His left eyebrow arched at the last. Then, he surveyed Sabrina’s wares and pursed his lips.

“You don’t have any o’ the brands I recognize,” he observed. And I noticed the depth and richness of his voice. I almost sighed with pleasure at hearing it.

“No,” I admitted. “We’re a little out of the way and importing items into the valley is hit and miss, at best. So, we make our own.”

“Sensible,” he allowed, nodding. “Okay,” he decided, picking up one of the Workman’s Specials. “I’ll take this one. How much?”

When his black eyes met mine, I just stared, enthralled, until he repeated, “Miss? How much?”

I shook my head to clear it—one of those silly actions that don’t really serve a useful purpose, but always seem to happen spontaneously when you’re flummoxed. Blushing from top to toe, I forced a smile that no doubt only made me look the more fatuous and told him, “Eight seventy-five.”

Both his brows jumped and he pointedly scanned the bottle that fit his palm before he returned narrowed eyes to me. Then, he grimaced and sighed. And then he grumbled, “Don’t suppose I’ll find anything cheaper in a one-horse town in the middle o’ nowhere with miles to go before the next stop.”

I grimaced, too, and shrugged. “I’m afraid not.” Trying to placate him, I said, “But a little goes a long way; so, it will last awhile.”

Feeling a need to make up for what he obviously perceived as highway robbery on my part, I took the bottle from him and, on the way back to the cash register, I cast a potency spell upon the shampoo. Then, I rang up the sale, accepted the bills he handed over, and gave him the change owing.

“I’m sure you’ll be happy with it,” I added cheerily as he turned to leave.

But he merely cast a chary glance back over his shoulder and stalked out.

I sighed wistfully as I watched after him, admiring his broad back and round butt and long legs and smooth swagger. “So much for my perfect cowboy.”

“Nothing,” I replied as Sabrina approached. “What’s that?”

She held up a black bottle that had once held liqueur and commanded, “Smell this.”

I frowned and glanced to her, then stared warily at the container that could hold anything from a concoction meant to eliminate warts to a brew designed to induce flatulence. “What is it?”

“Perfume,” she responded with pique at my hesitance.

“Okay,” I acquiesced on a resigned sigh. I leaned over the counter and sniffed. Instantly, I reared back and snorted and blinked hard and shook my head violently. After a couple of coughs, I exclaimed, “What on earth, Sabrina! It smells like a cesspool!”

Her mouth pulled aside and she exhaled heavily. “Damn! Too much horsetail.” She pivoted and walked back to her laboratory.

As I had feared, the reek plagued me for the rest of the day. 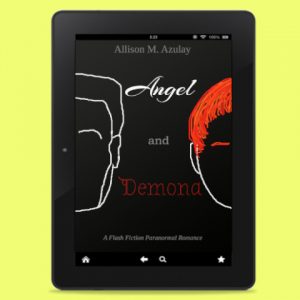 Free e-book.  See Books2Read for vendors that carry it.