THERE IT WAS AGAIN.  That low reverberation that set my teeth on edge.  That middle-of-the-night scramble to wash and dry laundry that should have been done in the day, or at least in early evening.  It wasn’t like she worked every day; so, she could have got out of bed and washed several loads on a day off.  But no, she always waited until the last minute, until she was racing to find something clean to wear.  Nor did she have kids to tend or a husband with whom to do whatever spouses do when they’re not in bed together; so, she had no excuse for not getting it done at a reasonable hour.  Surely she could forgo the bar scene one night a week?

I rolled over and tried to cover my ears with the pillow, but that didn’t work.  I couldn’t keep the darn thing in place, and it didn’t matter anyway because I could still hear—or maybe feel—the vibrations when the spin cycle kicked in, and the general drone while the dryer ran for a full forty-five minutes.  This time, there were clicks and thuds, as well; I figured she was drying something with a zipper alongside her tennis shoes.

THAT WAS A SUNDAY NIGHT, I remember.  When I had an important meeting in the morning.  I needed to be rested and sharp.  And I did not need dark circles of sleeplessness under my eyes.  But try as I might, I could not sleep at all.  Nor could I spend the night in a motel, like I had done the last eight times I was in this fix because of her:  I had maxed out my credit cards on such escape attempts and on the expenses that had been forced on me after somebody rear-ended me in the parking lot and slammed my vehicle into the neighbouring building.  A little old lady across the street told me it was her, the Neighbour from Hell, who had cost me thousands when the insurance company refused to cover me for the property damages the law firm next door sued me for, on top of declaring my car a write-off and hiking my insurance premiums on the basis that I was suddenly a “bad risk,” after ten years with a perfect driving record.  So, I could no longer afford to drive and it was her fault.  Unfortunately, someone showing signs of dementia does not make a reliable witness; therefore, I could not place the blame where it belonged.

So, here I was, stuck in the apartment immediately above the laundry room that should have been closed every night, if the landlord had had the decency to take care of the tenants he wasn’t sleeping with and the backbone to stand up to the one he was.

By the time the alarm blared and I threw off the blankets, I was in a foul mood as well as looking like death warmed over.  After the shower that did not refresh me, I wiped the mist from the mirror and stared at the pale, lined, stressed face that stared back at me.  And I wished my neighbour dead.  Not just gone.  Dead.

Then things went from bad to worse because, in my fatigued state exacerbated by the year of enduring too little shut-eye since Sheila Norris came to the building, I forgot my laptop and had to get off the bus halfway to the office and pick up another to get back to my place to grab the object essential for my presentation, then haul my ass downtown again.  Naturally, I was late, and my boss gave me the evil eye as I tried to slip into the boardroom quietly but failed when I stumbled over Orrin Sackett’s size-fifteen feet.  (Yeah, that’s his name.  His dad couldn’t get enough of Louis L’Amour’s books.)  And wouldn’t you know, I fell not on Orrin but against the client’s chair just as he was taking a sip of black coffee.  Several mouthfuls’ worth of java stained the front of his umpteen-thousand Savile Row suit.

As if that wasn’t disaster enough for one day, I lost my grip on my laptop and it hit the floor hard enough, apparently, to crack the hard drive.  Or maybe it was the odd angle at which it impacted that did the damage.  Whatever the cause, it was totalled.  And when I tried to retrieve my backup files from my desk, I discovered they had been infected during the ransomware attack the month before but somehow never got cleaned up by our IT guys.  As a result, the whole damn system went down when I opened them on my office computer.

The result:  The client stalked off, angry that his time had been wasted and his suit ruined and vowing to take his business elsewhere.

The minute the man was gone, the boss gave me an hour to clear out my stuff and, in front of everyone, ordered his secretary to have me escorted to Human Resources for my severance pay.  There, the Personnel Director assured me that I would receive no recommendation letter because, and I quote, “Your file shows a disturbing downward trend in your productivity, as well as an increasingly abrasive manner with coworkers and a generally negative attitude.”

The woman’s accusations hit like a blow with a baseball bat:  I had consistently received excellent performance evaluations all the years I had worked for the company.  At least, until the most recent two reports.  And I thought I had made it clear that I was doing my best to counter the problem that was no fault of mine.

And when had I ever been “abrasive” with my colleagues?  I didn’t socialize with any of them, that was true.  But I had always been courteous in my dealings with everyone.  Was not being everyone’s best buddy suddenly a sin?

And what the hell was “generally negative” about my attitude?  I was professional and expected the same from the other members of the team.  What was wrong with demanding that my coworkers take their jobs seriously and strive for efficiency?

But the boss was complaining that I was not productive enough.  Why did that apply only to me and not to those who consistently wandered in late, took long lunch “hours,” left well before closing time, handed in reports full of typos and misspellings, failed to do proper research for said reports, and basically treated their jobs as an inconvenience?

At first, I stood numb with shock as the director set one of the clerks to filling out the paperwork that would end my employment while another calculated the amount owed to me.  As I watched the process and waited to sign the termination notice, rage swelled inside me, hot and red and ready to explode.  I glared at the head of the HR department as she handed me the documents she had signed with a flourish, and I snatched them from her without a word.

Mere seconds later, as I reached the door with a security guard at my elbow, I heard the Personnel Director ask for the file on the new employee already slated to replace me:  Sheila Norris. 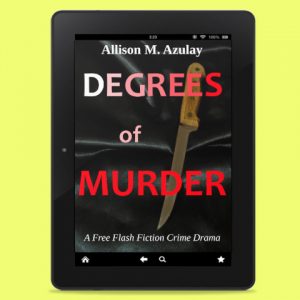