IT WASN’T FAIR. Jennifer scowled and pouted as she stared out the window of the limo at the passing scenery of trees and mountains that proved she was being sent to the middle of nowhere.

But why should she be punished? she wanted to know. After all, it was only the third school she’d been expelled from. (If you didn’t count those four times in kindergarten and grade school. And she didn’t.)

Okay, expulsion from the boarding school in England was her fault: She’d been miffed, downright angry, and feeling abandoned when she was sent to a whole other country, and she had flooded the bathroom on purpose. But she was only thirteen, at the time. An impressionable and expressive child.

Back home, she’d had no difficulties at all in the Halstead Academy and made lasting friendships there. Surely that counted for something.

As for her issues in university, the Poli-Sci professor in the first had no right to kick her out of class just because Jennifer had set him straight. After all, she knew more than he did. Had she not watched her parents and uncle operate at parties and charity events, on the golf course and yacht, and from their offices all over the world? She knew better than any teacher how politics really works.

She admitted to herself that she might have been a little harsh, telling the dean that Professor Bainbridge’s class was like watching her phone recharge. But honestly, she’d have been a lot more engaged if she’d been allowed to study something relevant. Fashion merchandising or makeup manufacture, perhaps.

And she might have done well in the new college, even forced to take colourless courses. But while she had no actual proof that the prof and the clique that often sneaked out in the dead of night to that abandoned house on the edge of the campus were witches or Satanists or whatever, they seriously creeped her out.

“Hmmph!” she snorted in vexation. Then, she sighed. At least she’d managed to keep her cell phone, this time. Maintaining contact with her friends would keep her sane.

LOGAN MACNEILL CURSED when he saw the black stretch limousine turn into the lane. He had more than enough to do without having to babysit the delinquent kid of one of his father’s former army buddies―a job that had been foisted upon him just this morning. Obviously, Dad had known for at least a couple of days that the girl was coming, but he had deliberately left telling Logan to the last minute to ensure there would be no choice in the matter.

He spat out the piece of straw he had been chewing and stalked forward to wave the vehicle into the secondary driveway that led to the cottage sitting a hundred yards south of the main house. No point dragging luggage from one building to the other.

Logan followed at a jog as the chauffeur― no doubt one in tailored uniform, he thought― drove at a crawl to the little yellow bungalow with black shutters and roof of silvered shingles. Being the only MacNeill on the farm, he’d have to welcome the little brat and see her tucked away in her room.

“OH, MY GOD, TIFFANY!” Jennifer exclaimed into her cell. “It’s positively rustic!” She frowned and grimaced as she tried to catch the response. Reception had become increasingly erratic since sometime after they left the main highway. “What?” she called loudly as the car turned into a straight lane leading to a cluster of buildings, some surrounded by trees and others bounded by paddocks, or whatever one called the fenced bits of land around a barn. “I can’t hear you.” At another unintelligible reply, she shouted into the phone, “The cell service is poor. I’ll have to try again later.”

With that, she disconnected the call and shoved the phone into her purse, only then realizing that they had veered away toward some sort of outbuilding. She frowned, puzzled, when they slowed and stopped before the structure almost enclosed by wire fences and wide fields and situated the equivalent of at least ten blocks, she figured, from the larger buildings.

Tony, the driver, opened her door She stepped out daintily and stared up, appalled, at the tiny house with little porch, the hut she was sure could not comprise even a proper bath facility much less a closet big enough for her clothes, even though she had been so rushed by Papa that she had managed to pack barely enough for a weekend. (She hoped she would find a boutique nearby. She abhorred the very thought of making do with wearing the same outfits more than once in a season. But she expected the locals were not sophisticated enough to notice the glaring faux pas.)

A stranger’s voice turned her.

She eyed the tall, lean, dark-haired and darkly tanned cowboy in sweaty shirt and faded jeans―actual old ones, not designed to look that way as a fashion statement, outdated as that was―and western hat and scuffed boots. He had the audacity to look her up and down as he approached with his hand out. Rather than touch him lest he have fleas or something, she straightened, put on her be-kind-to-the-servants smile, and answered coolly, “Yes, I am Jennifer Baxter.” With an imperious wave to the heaps of garment bags and dozen cases being removed from the limo’s trunk, she added, “Do help Tony with the luggage, there’s a good man.”

She pivoted toward the cottage she planned to complain to the owner of this Godforsaken hellhole about at the earliest opportunity. But something underfoot threw her off balance and she screamed as her ankle buckled and she began to fall.

All at once, she was in the stranger’s embrace, smelling his perspiration and feeling his damp arms as he swept her up and carried her to the narrow veranda. When he had deposited her none too gently upon a cushioned chair she hoped contained no insects, he bent and snatched off her shoes in one swift stroke.

“You’ll break your neck wearing these stupid things,” he snarled. “You’re not in the city, Missy. You won’t find any pavement or sidewalks out here. If you don’t have proper footwear, you can damned well go barefoot.”

To her astonishment, he then turned and strode away with her Edouardo deSilaghis.

Shocked, she sat dumbstruck, eyes and mouth wide for untold seconds until she recovered to leap up and rage, “How dare you, you unkempt barn-crawler! Bring those back here this instant!”

When he simply walked on toward the larger buildings barely visible beyond a screen of trees, she stomped off the porch to follow and retrieve her shoes. But two painful steps upon the gravelled lane turned her back to the greyed wood of the single stair. Fuming, she shouted, “I’ll have your job for this, thief!”

She seethed the more that he continued to ignore her.

Tony brushed past with two suitcases. She barked, “Tony, put those back and get me out of here at once.”

“Can’t do that, Miss Jennifer,” he replied ruefully. “Your father told me in no uncertain terms it’d be my job if I didn’t leave you here no matter what you say.”

She gasped, eyes rounding once more. “No! He wouldn’t! He wouldn’t abandon me in this horrible place!”

“But you’re staying with me?” she said in hopeful question, her face and tone now pleading. Surely there was room for him in the barn or barracks or wherever the hirelings slept, here.

“Sorry, Miss,” Tony apologized. “I have to go back. Orders.”

Jennifer blinked and swallowed as tears welled. Minutes later, when her father’s dutiful employee had placed all her belongings into the hovel she was to call home for an unknown number of weeks, she watched the limousine trail dust and kick up stones as it sped on its way to the road at the end of the lane and the highway miles beyond.

LOGAN GLARED at the silly transparent plastic high-heels decorated with sparkling swirls. Glass slippers for a Cinderella wannabe. He wanted to trash them, but they belonged to the condescending young woman he had been saddled with. So he tossed them into the cupboard at the front entry and slammed the door.

He turned to Mrs. Kincaid, the MacNeills’ cook, and spat, “Dumbass little princess.”

The middle-aged domestic cocked a brow and suppressed a grin. “Look on the bright side: It’s only for a few weeks.”

He snorted. Then, he whirled and stalked out to the barn. He had work to do. And the last thing he needed was a poor-little-rich-girl complaining about everything under the sun―as he had no doubt she would.

As he jogged to the age-greyed structure he had inherited when the family bought the property, and as he pushed open the wide door and stepped into the twilight of the interior, he forced away the memory of how she had felt in his arms when he caught her as she tumbled sideways. She was a college kid. Twenty at best. More likely shy of that, though she could pass for late twenties in that get-up. But acted like a spoiled two-year-old.

He reflected that this kid might look twenty-five, maybe twenty-seven, even without all that makeup. She had that sort of face. Like his mother, who had looked thirty from the time she was twenty to her late forties, before cancer aged her to ninety within a year.

In the murk of the barn, he set aside memories of his mother and the ache that always accompanied them to return his mind to the Baxter girl. Way too skinny. Anorexic, maybe. Probably trying to look like one of those scarecrow runway models. Not at all appealing, he told himself. Not at all.

But damn, she smelled good!

JENNIFER SAT ON THE EDGE of the bed that creaked under her weight. There was no sofa, just an ancient wooden chair that looked as though it would fall apart to dump her onto the floor if she dared to sit upon it.

She had tried her cell phone again, even pulling her Olivia Goh tennis shoes over her torn nylons to walk out into the open, well away from any buildings, all the while hoping no bugs would leap up from the tall grass to bite her. But a single bar on her phone had flashed on and off, telling her she was a long way from any cell tower. And when she returned, she found no electrical outlet by which to power her phone or her tablet.

She didn’t even have a lamp to dress and undress by. How could anyone live in such primitive conditions?

And that bastard had confiscated her designer shoes! Was that even legal?

She wiped away the wetness on her cheeks, her eyes narrowing and her mouth pressing hard enough to blanch. Jumping up, she stalked to the indoor outhouse that these hicks probably considered a marvel of modernity to wash and dress for dinner with the old friend of her father’s who owned this ridiculous excuse for a plantation.

She would charm the old coot. And she would have that stupid cowboy fired before the day was out.

Motion caught her attention. When she turned her gaze toward it, her eyes popped and she screamed. 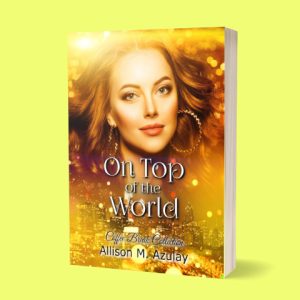