The armoury was empty because Marg was late. Lucky her, she had been assigned the job of writing letters to concerned citizens. The first shitload had come in overnight, and despite hours of work she had barely put a dent in it before she gave up and abandoned the task to take a shift on Security. She supposed she could have composed a general response and passed it on to someone who could type it up and print it off for mailing, but she had always hated receiving what amounted to form letters from politicians (the replies’ substance drafted by bureaucrats) after she had fired off a serious question or heartfelt comment to her Member of Parliament or the Prime Minister. She just couldn’t do that to the people out there who worried that the country was going to hell in a hand-basket.

From one of the extra gun cabinets that had been brought over from a government warehouse, she retrieved the C7A1 assault rifle that she had learned to use before it all hit the fan. The weapon even had a hot-pink nail-polish “M” to identify it as hers. She checked the ammo, briefly noting the cold hardness of the metal and the smell of the gun oil, and she grabbed another couple of magazines to stuff into the front kangaroo pocket of the oversized shirt under her lined jacket—just in case. The most recent attacks had been such a disaster for the other side that another was not expected for at least a couple of days. But the war had not been won; so, it was too soon to slack off.

Slinging the rifle over her shoulder, she strode out of the Security office and on through Confederation Hall to exit the Peace Tower and jog across the grassy expanse before the Parliament buildings, the open space liberally littered with battle debris. The assigned teams had gone ahead; so, she quickened her pace to catch up as she glanced to the sky. Clouds had come in from the east and the wind had picked up. But the air did not smell of rain.

Her stomach loudly reminded her she had barely touched breakfast and lunch had been forgotten. But she needed to keep her mind occupied more than she needed food.

From the broad driveway entrance to Parliament Hill guarded by camouflage-clad sentries she spotted Tsi-Guy and Carl sauntering westward. Other teams, she presumed, had taken the northern and eastern paths behind the stone edifices that had housed various ministries through more than one hundred years.

Strands of hair whipped about her face. She pulled them back to wrench off her elastic and re-bind the dark tresses that needed a wash. A whiff from her armpits reminded her she had not bathed in a couple of days. More than a couple. She needed to shower, but it would be hours before she returned to her bedroom in the hidden section of Parliament Hill that she and her comrades now dubbed The Barracks. She pushed away the memory of the huge empty bed with its satin sheets and down-filled comforter and jasmine perfume not yet overpowered by her own scents as she closed the gap between herself and the pair of guards ahead.

A flash to her left turned her head toward a guy with a camera aiming his telephoto lens at her. She sighed. Dressed in borrowed jeans and shirt, both faded, the former a size too small and the latter several sizes too large; her hair a mess; sporting a rifle; and generally looking like something out of a third-rate post-apocalypse zombie movie, her appearance would no doubt scare the bejeebers out of the public when those pictures went viral.

Worse, she had been volunteered to handle the media interviews when those could be arranged—a job for which she was by no means qualified. Canadians’ first impression of her would be bad; subsequent perceptions would likely go downhill from there.

But the Patriots could not keep everyone in the dark forever; the people needed to know somebody was in charge. More importantly, they needed to know that the new government, such as it was, had a vision of the future that they could embrace.

The future: such a nebulous thing.

The past, on the other hand, was all too clear. Had it really been only a few months since her world turned upside down?

To continue reading in digital format…. 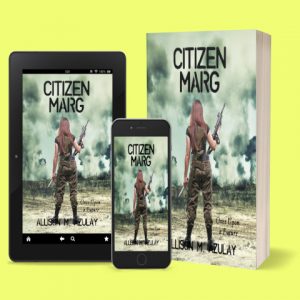