WHERE WERE YOU when the world went nuts? That will be the question asked of several generations who lived through the insanity.

Me, I was minding my own business, making a soup in my crock pot, when I first heard on the news that the world would end because of a virus. Naturally, I looked up corona virus as soon as I got online. And there it was: one of the many common-cold and influenza viruses that had been racing through families and communities every year with little lasting effect for as long as anyone could remember. Since I rarely caught cold or flu, I immediately dismissed the Chicken-Little scare tactics as the usual load of hooey invented on slow news days.

But it didn’t go away. The talking heads kept flogging that dead horse, and plenty of people apparently forgot that those same grave-faced know-nothings had predicted biological Armageddon for Sars, Zika, and Ebola, too. Not to mention an asteroid and other assorted disasters. But here we all were, still billions strong.

Some people just have nothing better to do than whip themselves into a frenzy over…whatever.

And so they did. With the help of corporate-funded organizations and corporate media all spouting conflicting and often incredible statistics that were easy to disprove with just a little research. The rumour mill went wild, of course, with all manner of conspiracy theories, some silly and some based on enough actual evidence to give them the ring of truth.

Then governments started getting involved, with dire warnings and subsequent ridiculous regulations based on thin air, supported by perennial hypochondriacs, media morons, corporate interests salivating at the opportunity to make billions or trillions on meds of questionable efficacy, and public health bureaucracies seeing a chance to throw their weight around.

I ended every day shaking my head at the monumental stupidity of my countrymen. What possessed them to readily stand six feet apart in the snow or rain waiting to get into a store, follow lines and arrows like kindergarteners, and don masks that would inevitably starve their brains of oxygen and lower their IQ’s further than television addiction and general grey-matter disuse had already dropped them? But I hadn’t really taken it all seriously, yet.

Then I found The Plan.

Over and over, one “expert” and another had mentioned the Global Economic Caucus. Being curious, I decided to look it up. So, despite fatigue from more than a week of sleepless nights thanks to the oppressive heat that, by day’s end, turned my upper-floor bedroom into a veritable oven, I perused several tabs and found a diagram—a sort of graph—with corona at its centre. That certainly drew a frown and a “Huh?”

One page led to another to another to another as I followed the trail of connections outlining expected consequences and proposed “solutions” in everything from government reactions and economics to education and child care to population control and tracking.

Dawn brightened my window by the time I sat back, still having made only a dent in my exploration of the site. I rubbed my eyes and shrugged my shoulders and twisted my neck right and left. Finally, I decided to log off and quench the thirst that had gone unnoticed for several hours.

One look into the fridge told me I needed to fetch a few things. Avoidance of shopping had forced me to use up a few ill-chosen items once I had finished off my favourites, but now my shelves were bare. I sighed. And I trudged to the shower.

A FOG OF DEPRESSION had filled my mind and the lack of sleep had by no means improved the functioning of my frontal lobes. I barely noticed the traffic on the streets, though I managed to cross at the light rather than jay-walk. (There’s something to be said for automatic responses). On I plodded, eyes downcast, occasionally snorting irritably at a whiff of vehicle exhaust or casting a gimlet eye toward a fart-mobile sorely in need of a new muffler. Protests went in one ear and out the other as I continued past the lineup of patrons and sauntered into the grocery store to toss my purse into a cart and wheel it on into the market proper. No doubt glares followed me, but I marched up and down aisles, oblivious to all around me as I snatched up vegetables and fruits, eggs and milk, a package of trout, and a loaf of bread before I headed for the check-outs.

I stood waiting for an open cashier, mulling all I’d read the night before, when a repeated sound finally broke through my haze.

“Ma’am. Ma’am.” The voice had become louder and more insistent.

I looked up and frowned at the man in the dark blue uniform and the pale blue mask. “Huh? What?”

“You’re supposed to be wearing a mask.”

I blinked at him, uncomprehending.

His head tilted and grey-blue eyes surveyed my face. “Are you all right, Ma’am? Are you feeling ill?”

I considered a moment before I answered, “No. Just tired, I guess. I was up all night. But I ran out of pretty much everything.”

I blinked at him again. “Mask?” His blue face-covering drew my focus. “Mask,” I repeated.

“You really are tired, aren’t you?”

I vaguely noticed his tone had softened.

“Can we move along?”

At the disgruntled demand from behind, the cop suggested, “Ma’am, just go to the cash, there. I’ll see you get home.”

“Right. Cash.” I pushed the cart to the empty conveyor unit and piled my groceries onto the newly disinfected black plastic. Minutes later, bagged foodstuffs in each hand and purse over my shoulder, I followed the policeman out into the parking lot.

“Which car is yours?”

I stared at him a second before I responded. “I don’t have a car.”

He looked at the bulky bags already cutting into my hands, a couple straining with the weight of their contents. “Come on. I’ll drive you.”

With that, he waved me on and I walked beside him as he led me to his squad car. When he opened the rear door, I frowned and wondered, “Am I under arrest?”

“Here.” He took one handful of bags and placed them into the rear seat of his vehicle, then shoved the second lot beside and slammed the door. When he opened the front passenger side for me, I slid in. A sniff dragged into my lungs the scent of pine, and I spotted the air freshener tab attached to the dash.

“Where to?” he asked as he started the engine.

“Oh, right.” I fumbled with the buckle as we pulled out of the lot and turned onto Main.

“TWENTY-EIGHT FLORENCE,” he announced when he stopped in the empty driveway.

“Thank you,” I replied as the seatbelt released and snapped back. I had climbed out of the car and rearranged my shorts, pulling away the sweat-dampened cotton from my thighs, and fetched my keys by the time he opened the rear door to gather my groceries.

“I’ll carry them in,” he offered. “Just go ahead and unlock your door.”

“Oh, thanks,” I said, now befuddled not only by fatigue, but by the heat that had soared with the intensity of the solar rays in clear, blue sky. On the front stoop, the keys rattled as I twisted first the deadbolt and then the handle lock. When the front door opened to somewhat cooler temperatures, I sighed with relief and turned to tell the kind stranger, “Just set them here. I can carry them to the kitchen in a minute.”

“There you go,” he said, easing the bags down gently in the vestibule. Then, he looked me over a moment and added, “I’d advise you to get yourself a drink and get some sleep.”

At that, he frowned. “Is there something you need help with?”

I searched his face a moment as I considered the question, zeroing in on the mask mottled with darker spots where sweat stained the papery shield that did not serve the intended purpose. “You shouldn’t wear that,” I said.

My gaze rising to his eyes, I replied, “It’s all a scam, you know. The whole thing. The GEC has been planning it for decades.”

“What are you talking about?”

“The Global Economic Caucus,” I specified. “And whoever is in charge of that. I read it on their website.”

His tone skeptical, he challenged, “They said it’s a scam.”

My mouth pulled awry in echo of the cynicism in my eyes. “No, they didn’t say it in so many words,” I admitted. “They blow smoke and sunshine. But they’ve linked the virus—maybe the specific disease was something slotted in just a few years ago, but the general idea had already been part of the plan—they link the virus to every facet of our lives and the changes they intend to manoeuvre us into. The ‘new normal’ they’ve been drumming into our heads to excuse more and more stupid rules that make no sense. More and more restrictions on our rights and freedoms. Until we have none at all.” I added, “Just like Orwell predicted in his book, Nineteen Eight-Four. But worse.”

He stared at me for a minute. At least, it felt like a minute. Finally, he said, “The Global Economic Caucus.”

“Click on the Platforms tab and check out Corona Action Plan.”

He regarded me another few seconds. Then, he said, “Get some sleep, Ma’am,” and he left.I stared at the closed door for an unknown amount of time before I locked it, put away my groceries, and took myself to bed to crawl between the sheets fully clothed. 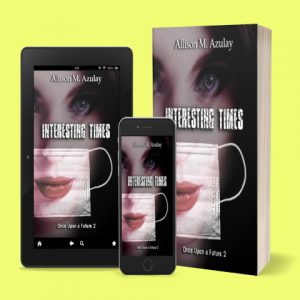 Find the print version through Barnes&Noble or at local bookstores using IngramSpark’s iPage.