HER LIFE SEEMED to be no more than a series of accidents: from her mother’s unintended pregnancy (to be fair, all Nora Nelson’s four children were unplanned); to her ending up highschool valedictorian after the original choice got mono and second choice overdosed; to her unexpected acceptance at university and even more astonishing graduation despite struggles to scrape through while working at a fast-food joint; to her first job at an ad agency trying to make various household products appealing; to her second as copy writer, general assistant, and coffee maker in a Public Broadcasting station.

Devi Nelson did not mind being a glorified secretary. At least she no longer had the stress of attempting to turn dollar-store sows’ ears into boutique silk purses.

No, her days were not an issue. Her nights, on the other hand….

A QUICK BRUSHING of her cropped dark-brown hair and a change into cotton pyjamas printed with pink bunnies (a joke birthday gift from her brother two years before) prepared Devi for slumber. She slid between the sheets of the all-but-free second-hand double bed she had bought on moving to her own apartment. Nora Nelson assumed the spacious sleeping platform had been a hint to the universe that her daughter hoped for a warm male body to share it with, but Devi could not explain even to her mother that the very thought filled her with dread. So far, though, the universe seemed as thick as her boss’s eighteen-year-old personal assistant Gina, the niece to whom he had promised a job, so there was no danger of Nora’s conjugal dreams for Devi coming true anytime soon.

Lying supine, blanket and sheet tight to her neck and knees together, Devi stared several minutes at the band of light that stretched across the ceiling from above the lacy curtain and plastic blind. She counted the minutes, waiting for the outside light to shut off and wondering what had tripped its motion sensor. A cat, probably. At sudden darkness, she closed her eyes with a sigh.

Maybe tonight she would sleep straight through. It was always the hope.

DEVI WOKE WITH A SCREAM fighting to escape from her throat. She stared owl-eyed into the black, searching for sign of her attacker and listening for its breath. But nothing disturbed the quiet of her room. Gradually, so gradually, her heart and breath slowed as she lay still and alert while eternal minutes ticked by. Eventually, she drifted off again.

“WHY DO YOU ALWAYS look like shit in the morning?”

Tact was not Gina’s strong point. Like her uncle, her olive skin, black hair, dark eyes, and short but generally substantial Roman build belied the surname bestowed by the patriarch of the Phillips family. The girl’s blatant stare demanded an answer.

Too cross to bite her own tongue, Devi replied, “Maybe I just get tired of stupid questions. Don’t you have work to do?”

The kid pouted and whirled to stomp into her uncle’s office.

Opening a packet of coffee grounds into a filter and filling the glass pot for the morning brew, Devi listened as Vic Phillips both consoled and chided his youngest employee. A couple of minutes later, Gina marched out and turned toward the studio on the errand Vic had devised to keep her busy. He followed her out of his office, but stopped to lean on the jamb of the kitchenette that lay three paces from his door.

“You do look like shit,” he commented with sympathetic eyes and a lopsided smile.

Devi heaved a sigh as she flicked the button to turn on the coffee machine. “I know. I don’t sleep well.”

At that, she matched her boss’s grin. “I’ll order one from Amazon. Tall, handsome, and blind enough to think I’m a beauty.”

Vic shook his head as he laughed. “Kid, you gotta work on that self-esteem. If I wasn’t happily married, I’d give you a tumble, myself. And the techs think you’re a looker, too.”

Devi retorted, “But they really are blind! Too much time under studio lights.”

Her boss shook his head again, his shoulders and paunch shaking with his chuckles. But he sobered and said quietly, “You need to see somebody about those weird dreams of yours.”

Her breath caught and Devi gaped at him. “How did you know?”

He confessed, “I overheard you talking to Estelle about it.”

Estelle Draper was the studio’s hairstylist, makeup artist, costumer, and set decorator. And the only person, besides her mother, in whom Devi had ever confided about her dreams.

With a fatherly pat on the shoulder, Vic suggested, “While you’re looking up all that info for the show, why don’t you spare a few minutes to find a counsellor?” 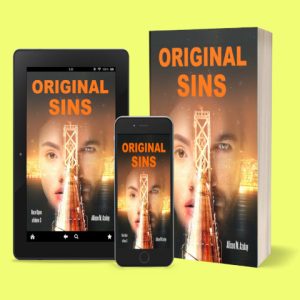 Digital version is available through Books2Read.

Find the print version at Barnes&Noble.