HE RODE IN ON A WHITE.

Tara had been feeding the chickens when she heard the dog bark warning of the approach of a stranger.  She quickly tossed the rest of the grain onto the ground and raced with her empty bucket to the house to see who it could be.  No one had come this far out since her father died two years ago.  Back then, a few of the older couples from town had made a point to visit and bring food or tools or what-have-you.  Duty calls, they had been:  the sort of perfunctory gestures one made to the poor relation of the not-so-dearly departed.

But no one had bothered since a month after the funeral.

Granted, the big snowstorm that had socked everyone in only six weeks after they planted Da gave the townsfolk reason to stay close to home.  But they could have come after the thaw.  Could have but didn’t.  Social obligation had quickly given way to personal matters and day-to-day routines.  And the Menzies farm lay miles away, at the end of a rarely used track.

Yet here, someone was riding up, she saw as she pressed her hand to her forehead to shade her eyes.  One man.  On a horse.  A pale horse she did not recognize and a stranger she had never before seen, by the look of him.  She could not see his face, but she never forgot a man’s bearing on his mount.

She ambled forward, head tilted in curiosity.  For a moment, she wondered if she was presentable in her old yellow dress and her flour-sack apron, her hair tied with twine.  Not that she had much better in her cupboard.  But at least she wasn’t wearing Da’s trousers and shirt, today, like she often did, she supposed.

“Ma’am,” the stranger called with a polite touch of his ash-coloured slouch hat as the dog ran excitedly beside him and around and back again.  “Wouldn’t happen to know where a man can find a place to bed down, would ye?”

“Ye’re a long way from town,” Tara noted.  “But ye could git back before dark if ye don’t dawdle.”  She grimaced at the mutt’s noise and shouted, “Blue!  Hush yerself, now!  Git!”

The dog ignored her, as he always did.  (He was Da’s dog, after all.)  He just kept running back and forth as the rider slowed to stop a dozen yards from her.  At once, the hound quit yapping and dashed to sniff at the stranger who dismounted without hurry.

He was long and lean, this one, with dark hair and light eyes beneath the hat, and skin browned by the sun.  Sweat dampened the sides of his faded brown shirt and bits of pine tar smudged the well-worn denim jeans pulled over his scuffed brown-leather boots.  He smelled of sweat and horse and maleness, and his voice purred with a deep resonance as he gentled the white stallion, patting the horse’s neck and murmuring reassurance as the old mongrel warily inspected the newcomers.  “Didn’t come from town, Ma’am,” he said.  “Come from up by the ridge.”  He bent to let Blue sniff his hand and then he stroked the dog’s head.

Her brows rose in surprise.  “What ye been up there for?”

“Prospectin’,” he told her as he continued to befriend the hound.  “Company out o’ Toronto hired me to look around.”

She blinked and frowned, wondering what anybody would want with the heap of rock and pine that lay a mile or so to the north.  With a twitch of her nose, she repeated, “Well, like I said, ye could git yerself to town an’ take a room.  Miss Watson’s boardin’ house is clean, they say.”

His wide mouth pulled awry in a lazy smile as he looked her up and down in a way that sent startled thrills from her unmentionable to her heart.  He said, “But the sun’ll set soon and I don’t know the road.  You sure ye couldn’t put up a traveller for the night?”

Tara swallowed and her gaze flitted here and there as she considered what to do.  Finally, she looked to him and allowed, “Well, I s’ppose ye could sleep in Da’s room.  I’ll put on fresh sheets fer ye.”

“Pretty name,” he said as he strode to her and held out his hand.  “Will Regan.”

She clasped his hand firmly and shook the way she had seen Da greet a man.  “Welcome, Mr. Regan.  Ye can bed down yer horse round back in the barn.”

“I thank ye, Miss Menzies,” he responded with a widening grin.

“Much obliged, Miss,” he said.  With that, he led his horse round the side of the age-greyed log house to the equally silvered board-and-batten barn that dwarfed it.

She stepped up onto the unpainted porch boards that squeaked with her passage and she hoped Da’s mattress wouldn’t need much pummelling to get the dust out of it.

WILL REGAN BRUSHED DOWN the horse he had hired out of Peterborough and he picked up the stallion’s hoofs, one at a time, to inspect the shoes.  He whistled as he scraped away bits of stone wedged under the iron and then pulled a couple of burrs from the animal’s tail.  He smiled to himself as he recalled to mind the girl he’d found in the middle of God’s Country.  He had no doubt she dwelt here alone, for the farmstead showed many a sign of neglect:  fence posts nearly toppled by frost heave, broken wire unrepaired, a sagging veranda roof on the house, rusted tin on house and barn, thistles grown taller than his six-foot-three, and one small square of garden a few yards from the cabin.

She could hunt, he knew, for skins had been stretched to dry on the side of the barn.  And she surely had meat aplenty, for he had passed the chicken coop and rabbit hutches on the way to the old building that, by its design, had once housed cattle as well as horses.  Now, a pair of sheep wandered through the wide door, bleated at him, and then left him in peace as they nosed about the paddock fence in search of grass as yet untouched.  And a fat sow made quick work of a snake under an oak that shaded the south side of the house, while a brace of shoats rooted nearby.

Da, she had mentioned.  Her father had died or abandoned her, he figured.  Was she an only child?  Or had she simply stayed behind, either as youngest or eldest, when brothers and sisters married and moved on?  No matter.  She lived out here, far from any form of civilization, and managed on her own.  So, she had spunk, at least, if not a genteel manner or a comely face.

She was not ugly, he judged.  Just…unkempt, was perhaps the word.  With no one else about, she made no effort to prettify herself.  He had seen from as far back as the gate the old-fashioned patched yellow dress hemmed to her ankles and the bare feet and the wild brown hair flying free of its binding, the loose tresses floating about her face in the fading sunlight.  That, more than any other factor, had led him to the conclusion she resided alone.

And that, he decided, was a very convenient circumstance. 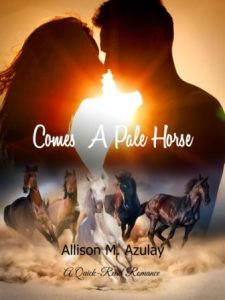 Available print in the Coffee Break Collection Fateful Attractions. Find it on Amazon or Barnes & Noble.