I SHOULD HAVE KNOWN.  Terry was a schmuck at the best of times, and these were by no means the best of times.  He was headed for rehab, and he asked a couple of us to take his gigs while he cleaned out.  I agreed.  I should have known better.

OLDER WOMEN HAD ALWAYS BEEN MY SPECIALTY.  Not that I liked them any more than I liked the younger ones; I just found it easier to play the game with them.  And they knew the score; so, most never expected more than I could give.  A few suggested marriage—a boy toy they could have at their beck and call—but I made it clear I wanted no strings, and all save one settled for regular visits and the odd weekend in the Caribbean or Switzerland.  That one persistent old broad, though, was a whiney pain in the ass for a year before a stroke took her and ended my torment.

Yeah, I know.  I’m a heartless bastard.  You have to be in this business.  And I suppose I come by it naturally, thanks to my mother and her “friends.”

I was already tall at twelve and grew to six-foot-four, so I tend to stand out in a crowd.  Muscular even as a teenager, well tanned, with black hair I keep long and tied at my nape.  And I’m handsome; all my ladies tell me with their eyes if not their words.

But Mom was my first.  She called it “training” and, for all it felt great, it also felt…unnatural.  Wrong.  I guess that’s why I numbed myself inside.  It was the only way I could get it up with her after that first time.  And once she started bringing customers home, I avoided her as best I could.  But she had needs, and I was the only guy available back then.

But that’s all old news and I don’t think about it much anymore.

I suppose you could say I forgave her.  Not that I ever really begrudged her in the first place.  I even went to her funeral.  She’d overdosed along with her latest man, and the two had lain in the dump they lived in for a week before somebody finally decided to find out what that smell was.

I hadn’t seen her for years; that’s why I hadn’t realized she was using.  I’d been sending her cash every month, not knowing I was feeding the habit that would kill her.  I guess some would call that karma.

But, like I said, that’s all old news and not my problem.

The present:  Now, that’s my problem.

IT HAD ALL SEEMED NORMAL ENOUGH, though “normal” is not a word that remotely applies.  The agency texted me to take a plane to Washington and wired me the tickets and reservations for a hotel in D.C.  Normally, I stay as far from that hellhole as I can.  A nest of sickos and weirdos, that town, just like L.A. and New York—and that’s not counting the perverts.  Three places I don’t even like to visit, much less work in.  Just sitting in the airport on a layover makes me want to take a long shower.

But I’d promised Terry I’d take his regulars and, for all he was an asshole, he was the only friend I had.  Besides, the boss was still pissed at me for refusing a poor-little-rich-girl out of Chicago looking for action during her vacation in the south.  The sonofabitch had finally admitted I was right:  She was underage.  But the new management (the company I’d signed on with years ago got bought out a few months back) doesn’t give a damn about precautions; they’re just in it for the money.  And while I’d already decided to go independent, I needed extra cash to tide me over till I established myself in another city.

So, when I got the call to take one of Terry’s out-of-town specials, I figured I could make an exception to my personal rule this one time.

Should have known better.

THE ADDRESS I RECEIVED BY TEXT took me to a rundown section of Georgetown full of abandoned three-storey houses that had once been the elegant town homes of politicians and magnates.  It didn’t surprise me that I’d been directed here, because I’d read that a program of rehabilitation had been initiated and many a junior politician and bureaucrat was taking advantage of the low prices for the fixer-uppers.

I passed the brownstone at a crawl, checking it out, and I noticed a light on upstairs, on the second floor.  No illumination anywhere else, but I figured she was alone and getting herself ready for me.  So I continued on around the block and checked the time on my dash.  Couple of minutes yet.  I eased to the edge of the alley, turned off the headlights, and cut the engine.

I wanted a cigarette.  But I’d been trying to quit and I hadn’t brought any with me; so, I just stepped out of the car, locked it, and walked around to the front entrance.

Most of the houses were dark.  Only two at the end of the block, on the opposite side of the street, appeared inhabited.  Good.  It wouldn’t do to have some concerned citizen trying to rescue a client who didn’t want rescuing.  That was the problem with rape fantasies:  If she played up her victimhood too well, there was always a chance the cops would be called in and I’d spend a night in an interrogation room trying to explain it was all just a game.  Back in Miami, they knew me and didn’t trouble me anymore.  But this was terra incognita and I could end up in the slammer if the woman backtracked out of embarrassment and denied having hired me.  Another reason I shouldn’t have come here.

With a last look around, I climbed the steps, rang the bell three times, and waited.  A minute later, the porch light turned on and the door opened.  I blinked in shock:  Instead of dressing the siren in filmy negligé and strappy sandals, this woman wore flannelette pyjamas under a terrycloth robe, rags tied in her grey-streaked brown hair, and fluffy bunny slippers that had seen a few years’ use.  She was short, maybe five-four, tops, and her squarish face bore ordinary features and pale eyes that looked green in the light of the lamp that overhung the door.  She wore no makeup and seemed tired.

It took me a moment to process her unexpected dishevelment, and I ignored the vague familiarity that a voice in the back of my mind noted.

Her words brought me out of my stupor.

Slipping into game mode, I pushed in as I said, “Yes, you can, sweetheart.”

Her eyes flew wide and she gaped at me as I held her arms and pressed her back.  I kicked the door shut behind me, and I walked her to the nearest wall to plant her there and lift her enough to kiss her.

She didn’t resist, at first.  Then, she started to struggle and emit frightened squeaks of protest.  Alarm bells rang in my head, but I dismissed them and persisted in my role as I groped her roughly per the instructions texted to me.

She tasted good, and I’d risen to the occasion already.  That was unusual:  Generally, I had to work myself up to an erection, which had the benefit of giving me plenty of time for the foreplay that pleasured the customer and guaranteed repeat performances.  But something about this dowdy little woman had me aching for her before I’d even gotten the scruffy robe untied.  Strange, what turns a man on.

It was not the increasing urgency of her efforts to push me away or the swelling volume of her screams that gave me pause.  It was the tears.

I stopped and pulled back, breathing raggedly with the desire I had not anticipated.  Those tears gleamed in the pale light of the exterior carriage lamp that shone through the transom above the door and the curtainless leaded-glass window nearby.  She stood trembling and sobbing.  I let go of her and stepped back, suddenly not sure this was an act.  Not sure I even had the right address.

“Excuse me, Ma’am.  Is this one-two-five Mary Street?  Are you Sarah Wagner?”

She blinked and frowned perplexedly.

It struck me to ask, “And you hired me?”

“Hired you for what?  I didn’t hire anyone.”  Her tone sharpened with anger and indignation.  “And if I had, that gives you no right to assault me!”

“That’s what I’d like to know.  But…but…I want you to leave.  Now.”  She straightened, elongating her neck, pointing to the door, and pursing her mouth in an adorable expression of dignified command.

God, I wanted her!

But something was very wrong about the whole situation, and my instinct for survival warred with my urge to sow my seed.  I stepped back again to put distance between us in hope of quelling the lust I couldn’t explain.

“Look, I know this is going to sound preposterous, but I was hired by someone to show you a good time.”

She blinked at me in bewilderment.  Then, she demanded, “What are you talking about?  How is what you did showing me a good time?  And who hired you?”

I sighed.  “I thought you hired me, but apparently that’s not the case.”

“Well, someone did.  And I was told you wanted a rape scenario.”

In outrage, she shrilled, “Why would I want such a thing?”

I couldn’t help smiling at her naïveté.  “Some women do.  Maybe a psychologist could tell you why.”

She pondered the notion a moment, her eyes searching the floor, before she looked to me once more.  Her respirations slowed and deepened and she swallowed.  She concluded, “Somebody wanted you to hurt me.”

“Maybe,” I allowed.  “But if I say so myself, my clients usually come away satisfied.”

When she didn’t finish, I supplied the word.  “A gigolo.  A prostitute.”

Tears flooded her cheeks and I gaped at her.

“What’s wrong?” I wondered as though everything was not.

She forced a smile and straightened, pressing her lips tightly as she struggled to control herself.  At last, she wiped her cheeks and eyes and said, “Never mind.  Doesn’t matter.”

At that moment, all I wanted to do was wrap her in my arms and comfort her.  Well, that and get her into bed.  But my brain had gone into overdrive trying to figure out what was happening and what to do about it.  At a suspicion, I crept to the window, staying back against the wall, and I scanned the street.  My gut and hands clenched at sight of a van parked across the way and one house up.  Another pulled behind it.  And a third passed out of view, slowing as it did.

Keeping to the shadows, I slid back to her and suggested, “Maybe you’d better get dressed.  I’ll check the back and see if we can get out of here unnoticed.”

With a wry smile, I told her, “Honey, you can bet your last dollar you were filmed letting me into your house.”

Waving dismissal of the protest, I said, “You know it and I know it, but whoever set us up will make sure no one believes that.”  I added, “And frankly, I don’t want to go to prison to protect your reputation, even if it would help.”

“Look,” I said gently, “just go get dressed while I find a way out of this.”

She nodded unhappily and trudged to a door that must have led to the staircase. 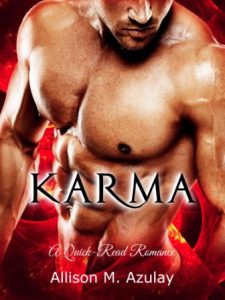 Available in print in the Coffee Break Collection In the Fast Lane. Find it on Barnes & Noble or through a local retailer using IngramSpark’s iPage. 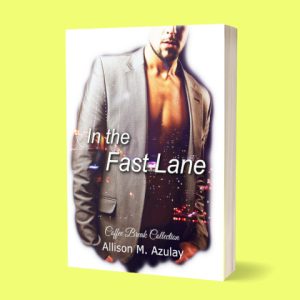