Let Me Love You

GRIGOR DASHED ALONGSIDE THE DEER, thrilling at the rush of wind through his long jet hair and at the thump of the beast’s heart as they sped together through the twilit forest.  His blood rushed and body tingled at the sensations of this newfound realm brimming with exotic creatures.  From tiny microbes to giant trees, the beings of this domain captivated him.

When first he had been banished to the Otherworld, he had been indignant at the injustice of punishment for a tiny indiscretion.  (It was just a joke, turning her scales black; mermaids have no sense of humour.)  But now, only a day later, he revelled in the novelty of this place where life proliferated in such magnificent variety.  Indeed, the Kin’s Domain of the Fay now seemed to him entirely too simple, despite the complexities of its hierarchies and of the interrelationships of its diverse inhabitants.  What other faeries called serene, he now considered boring.  The Queen had been unwise to send him here, he decided.  He just might never go home.

In the back of his mind, a concern expressed itself:  Did Aveen have the power and will to force his return?  She might be the Oldest of the Old, one who had always been, but surely she would not punish him twice for the same offence by refusing to let him stay here if he wished to remain?

He dismissed the thought.  The ways of the Elders often bemused him, he being a mere nine hundred and eighty-seven turns of the sun in age, and he could not guess at their reasoning.  Take, for instance, the law that forbade interaction with Men:  The Queen had warned him to avoid the race that called itself “human,” for direct contact with its members was subject to the severest of all punishments.  His father and mother had repeated the admonition.  Why? he wondered.  What made Men so fearsome?

He mentally shrugged.  What did it matter that one species was proscribed?  There was far too much to enjoy and he had every intention of drinking in all the marvellous new feelings he could find in this wondrous Terra.

The deer rejoined its herd and Grigor left the four-legged family sheltering in a glade as the celestial hues deepened from purple to black.  Able to see in the darkness, a trait common to the Fay, he negotiated the woods with ease, examining the texture of bark and leaf, watching furred animals forage and feathered ones fly, listening to the patter of feet and rustle of foliage, feeling the caress of wind and the kiss of water droplets as a light rain fell.

He laughed and he danced and he tasted the rain as lightning flashed and thunder grumbled.

HOW MANY TURNS OF THE SUN had he seen?  Many thousands, Grigor reckoned as he loped down the hillside toward distant lights.  He had been exiled again, though he had to admit to himself that, this time, he had more than earned his banishment.  Well, actually, he had earned all but the first, in his estimation.

He chuckled to himself, remembering Aveen’s expression when the ever-solemn Lord of the Centaurs detailed the transgressions Grigor had committed.  (He had been unable to help himself:  From the moment the four-legged windbag began his annual sermon upon the history of the equine race, an urge had seized him to ride the pompous fool in the manner of the Men in their relations with horses.  To that end, he had ambushed Lord Nee by the willow-pond, jumping from a bough of the great oak that overhung the strand.  When he hopped upon the Horse Lord’s back, Nee had bucked and squealed in outrage as Grigor clung until finally thrown into the water.  Though nearby centaurs snorted and threatened, the mischievous faerie had guffawed, encouraged by the titters of gnomes and rivermaids.)

Grigor was sure the Queen had wanted to laugh aloud.  But in the interests of peace, she had stifled her own urge and dutifully censured the faerie rogue.

He chuckled again.  Aveen had actually called him a “rogue.”  He rather fancied the title, he decided.  Yes, he minded not the epithet that proclaimed his distinctness, his nonconformity.  He was by no means ashamed of his dissimilarity to the majority of his brothers and sisters among Faeriekind.  Some—including his mother—had pronounced his antics mere youthful exuberance.  But he liked to consider himself a rebel.  Not that he had any intention of overthrowing the Council or the Queen.  He merely wished to disrupt, occasionally, the dreary sobriety of the Fay.

Alerted by unfamiliar sounds, he slowed and scanned ahead.

Too much light shone above the treetops to pale the evening sky.  Unnatural light.  Far more than when last he had wandered Terra.  He felt the effects of the too-white rays:  They frightened the animals, confused the plants, and blotted the stars.  Noise accompanied them, further causing distress to the natural world.  And strange unpleasant smells filled the air.

Curious, now, he hastened toward a discordant din.

FREYA WANDERED THE DUSKY PATH that twinkled with fireflies calling to one another.  Normally, she did not walk the trail at the edge of town even in daylight, much less on occasions, like tonight, when she left work late.  But after a long twelve hours counting inventory, she had broken her own rule and taken the shortcut from the warehouse.

In truth, she had no idea what she really needed.  She could not pinpoint the source of this sense of dissatisfaction that had pervaded her life of late.  When she tried to examine her malaise, her disquiet only grew as her mental meanderings seemed ever to lead back to a place she feared to go.  She dared not even put a name to that murky realm that hovered at the edge of her consciousness, for if she named it, she must define it.  And to define it, she must face it squarely.

A sound drew her from her unbidden introspection.  Now wary, she halted and glanced about.

“There’s enough to fear right here,” she whispered to herself as she peered into the gloom beyond the treeline to left and right.  She listened, hoping the thunder of her racing heart would not muffle sounds that communicated true danger.

Seconds that felt like aeons ticked by.  When no new noises met her ears, Freya turned, alert, wide-eyed, trembling, and she hastened back toward the roadway and streetlights.

“This was really stupid,” she berated herself under her breath as she increased her pace to a jog.  “Now, you’ve wasted time on the trail and you’re still going to have to take the long way around!”

GRIGOR STEPPED OUT upon a well-trodden footpath, but quickly hid behind brush at the approach of a Man.  Only one, he knew by the patter of two feet.  But he did not wish to engage with any of the creatures he had seen in the past.  They tended to be belligerent, these beings—toward all, including their own kind.  And while he need not fear them, he had no desire to mingle with them even were it not forbidden to do so.

Mankind was responsible for the unnatural lights and sounds and smells, he knew.  He had seen them building their dwellings in cramped clusters, scraping all trees and herbs from the soil for miles in every direction only to plant different varieties that needed coddling, smelting metals and forging blades, killing one another with abandon, and generally laying waste to everything within their view.

A figure advanced toward him and he realized with some surprise that this was a female in the garb of a male.  Why was she dressed so? he wondered.  Intrigued at the display of audacity that would once have earned this female a thrashing from her kin, he decided to follow her.

She moved swiftly on the peculiar footwear that muffled the noise of her passage.  But suddenly, a rustle to the left halted her.  Grigor scanned the wood and spotted the raccoon that had brushed by a fern, and he looked back to find the female—a woman, as she would be named in some cultures among Men—whirling to retrace her steps.

At once he blended with his surroundings, grateful that he had been in shadow already, though he knew his magical glamour would veil him from the eyes of a Mortal.  She passed him at a quickened pace, catching no glimpse of her observer.

Again, he followed, feeling her racing heartbeat.  His assumption that she might be a new class of warrior, a female class, evaporated at realization that, though she considered herself in imminent danger, she produced no weapon.

His interest piqued the more, he dashed after. 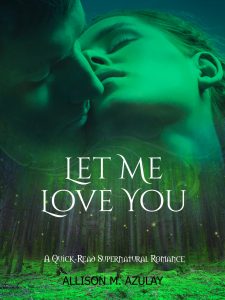 Also available in print in the Coffee Break Collection In Heaven and Earth. Find it on Barnes & Noble or at a local retailer using IngramSpark’s iPage. 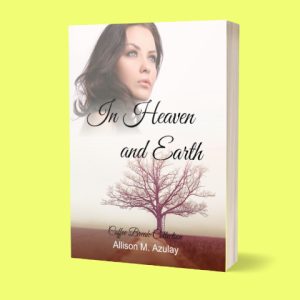