Des shot up in the bed, pulse racing and eyes frantically scanning for him. Disoriented, and finding no sign of him, she then searched her surroundings for something familiar, some hint of where she was. Her gaze landed upon the purse and backpack resting nearby, and she recalled the day’s wandering and eventual discovery of the boarding-house. Gradually, her heart rate slowed.

But her belly remained taut at memory of the sneering curl of Richard Levin’s lips and the threat that she knew was no bluff. He would hunt her down like an animal because she dared to reject him.

He had seemed so charming, in the beginning. Handsome, cultured, well-heeled, successful. And he had wooed her persistently, giving her extravagant gifts, sending flowers almost daily, and taking her to concerts and to cocktail and dinner parties with his influential friends. He had even talked of marriage.

But as soon as he had slid the enormous diamond engagement ring that he had chosen onto her finger, his mask began to slip. Suddenly, her friends were not good enough. He insisted she quit her job. He found fault with everything she did and owned. And his physical advances grew more insistent and then downright abusive.

The warning bell in the back of her mind that had rung the first time she met the blond Adonis now clanged incessantly. She had to get away from this demon in designer denims.

When she flat-out refused him and threw his ring at him, he actually locked her into the lavishly furnished apartment he had offered in one of his real estate properties when the brownstone she had shared with six neighbours caught fire and left them all homeless. The persistent suspicion that the blaze had been the result of arson rather than the faulty wiring the fire marshal had reported exploded to certainty when Richard held her captive.

But where there’s a will, there’s a way, as her mother had always said.

So, a few nights ago she had thrown together some necessities into a rucksack, dressed in rugged jeans and shirt and jacket, slung her sturdiest leather purse diagonally across her chest, pulled the backpack over her shoulders, and climbed down from balcony to balcony, sweating with exertion and fear of falling, until she found an open terrace door. As quietly as she could, she had slipped past a dozing man who smelled strongly of bourbon and out to find the stairwell and hurry down to the rear exit, her heart pounding all the way.

Miraculously, when she stepped outside the security lights failed, leaving the parking lot in darkness. Thrilling at the unexpected good luck that would ensure Richard’s security thug would not see her even if he happened to step out for a smoke, Des raced across the tarmac, into the street shadowed by majestic old locust trees, and on to the nearest bus stop. A city bus took her to within a block of her bank, and she used the automated teller to empty her account. Cash in hand, she made her way to the Greyhound terminal and got as far as Brandon. From there, she hitchhiked, keeping a loquacious middle-aged trucker company until she reached the next town, where she bought a beat-up jalopy for a song. That, she traded in the city farther along the highway, to drive the grey Ford that had brought her here.

She had hoped to cross the border. But now she was stuck in this out-of-the-way village.

A knock at the door startled her. Lorna Doone’s voice announced, “Supper will be ready in a few minutes, my dear.”

Desirée drew a deep breath and let it out slowly, flexing her clenched fingers and trying to ease tight muscles in order to calm her nerves. She was safe enough for now, she told herself. Richard had probably lost all trace of her after Brandon. 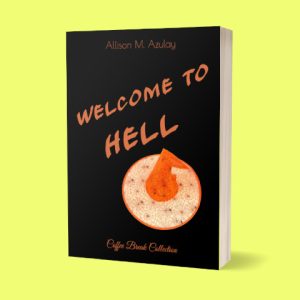 Coffee Break Collection 6. Click the image to link to Barnes&Noble.