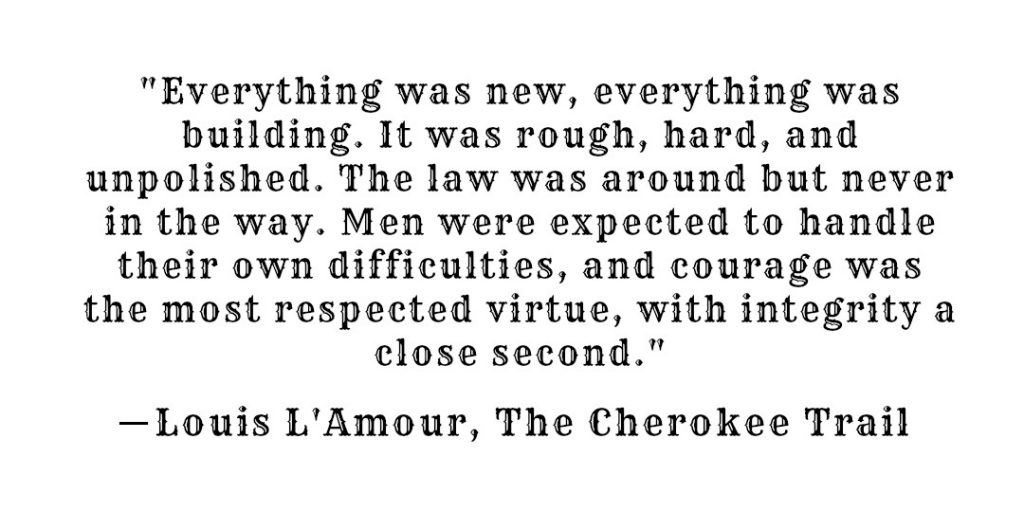 I have sung the praises of Louis L’Amour before, but I have been thinking lately of the messages of independence and self-reliance woven into his tales. I quote here from the “Sampler” section at the back of the 1982 Bantam Books edition of The Cherokee Trail:

“My stories are simply stories of people on the frontier, and those people were of all kinds…They were people trying to find acceptable patterns of behavior in a totally new environment, drawing upon their past but adjusting themselves to new situations and attitudes.

The frontier demanded they be self-reliant. Group-thinking and peer behavior had only limited application.” ―Louis L’Amour

The world is changing, and we are facing a new kind of frontier: not an unexplored land, but the need for new ways of thinking and doing that will serve us better than the old ways of hierarchy, war, conflict, tyranny, fear, poverty, and enslavement―some of it so long experienced or so subtle as to seem “normal.”

We have become too reliant on government, allowing those who claim rulership to tell us what to do, how to think, what we need, who to listen to, what we are allowed, and how to serve them. We have learned to stand in line, sometimes for hours; to fill in forms; to memorize information we will never use in order to pass a test; and to never question the word of people in uniform, on television, with titles before their names or letters after, with big bank accounts or expensive clothes, or who call themselves experts or authorities―even when they make no sense or behave badly.

We have let ourselves be convinced that we are not smart enough, able enough, or worthy enough. And for generations we have let ourselves and our children and grandchildren unlearn, or never learn, basic skills of survival and self-sufficiency that our ancestors took for granted everyone must know. So, we have become dependent upon products and systems that can easily break down or be denied us. And we have lost the sense of accomplishment and creativity that fulfilled peoples of the past, and the sense of connection to the land and to each other that sustained our ancestors.

We have been told that people living in earlier times lived short, unhealthy, miserable lives. But those who tell us these things are all selling their wares or the idea we need their “leadership.”

So, I offer here Louis L’Amour quotes from various books, to consider and perhaps to find inspiration to guide us toward a new and worthy future.

“We who now were alien…must learn to work together, to fuse our interests, and to become as one. This we must do if we were to survive…” ―Bendigo Shafter

“This was their land of Canaan, the land where dreams came true, but here there was a difference, for each one of them seemed sure that he had to make the dreams come true, that it would be the result of something he did.” ―The Cherokee Trail

“Don’t waste time worrying about the mistakes of yesterday. Each morning is a beginning. Start from there.” ―The Cherokee Trail

“What I like about this country is that nobody thinks anything is too big or too hard. If they want to do something, they just take it for granted they can do it, and then they just naturally go ahead.” ―The Cherokee Trail

“Out here, a man does for himself or it ain’t done. You just don’t wait for somebody to do it for you…Everybody saddles his own broncs out here.” ―The Cherokee Trail

“…some folks were scared…and there were a few who turned around and ran for home, their tails between their legs. There were others…who began to grow and to take big steps in the land.” ―Bendigo Shafter

Do you have any favourite inspirational quotes?