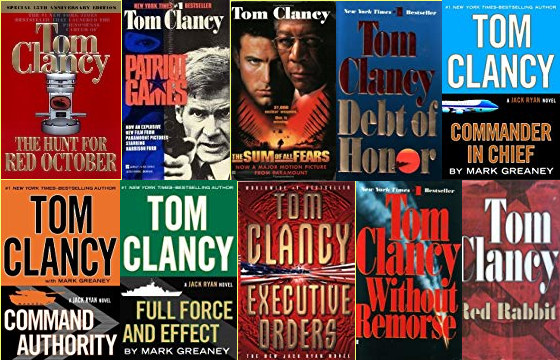 My personal favourite Clancy books are the Jack Ryan tales, though I have sampled his other series as well.  While I have not read The Hunt for Red October, I have enjoyed the movie and plan to get myself a copy of Red October to add to my Ryan collection.

The details, the politics, the interconnections, and the domino-like repercussions of the actions and inactions of even relatively insignificant characters form a web of intrigue that keeps me on the edge of my seat through lengthy books, only to find myself, at the end of each, wanting to start the next.

There is a Jack Ryan television series, these days, but no small screen (or large one for that matter) can truly capture the nuances of Clancy’s stories.

Side note:  Many of the Tom Clancy books are co-written by other authors (as in some of the books depicted in the image above).  That by no means diminishes the quality of the stories.

Have you seen the movies or television series based on Tom Clancy’s work?

Tags: Presidents and other secret agents

Websites and other wonders