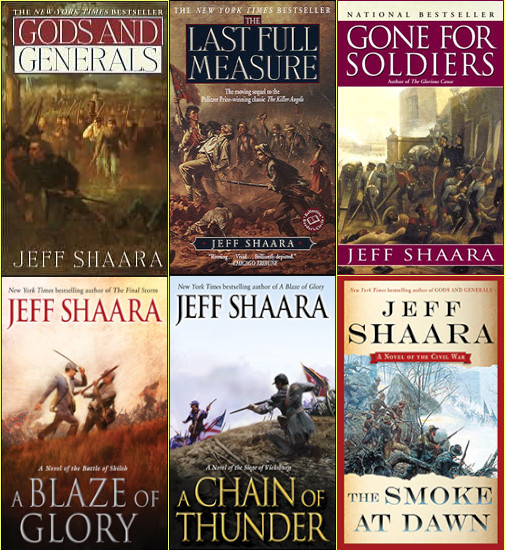 Jeff Shaara wrote Gods and Generals as a prequel to his father’s novel, The Killer Angels. Both approach the history of the American Civil War not as strictly historical narratives but as explorations of the primary real-life characters involved in that part of American history. And both books became successful movies.

Jeff Shaara’s writing style is unusual, with a staccato rhythm unlike any book I have read before. While that took some getting used to, and while I had a fair knowledge of the events portrayed in Gods and Generals, the tale itself kept me turning the pages, following the lives and actions of men, and their wives, caught up in the politics of the time and the emotions that compelled some to fight for the Union and some to take their loyalty to their state to the point of secession.

Along the way, I found myself in the peculiar and uncomfortable position of rooting for the men of both sides, even knowing the outcome of specific battles and of the war as a whole. Nor could I help sympathizing with both sides of the conflict, with those who abhorred slavery, with those who felt the Union represented a whole new and better form of governance, and with those who held strongly to the ideal of free will and sovereignty on both the personal and the wider communal levels.

All fought, killed, and/or died for freedom and for home, often subject to egotism and incompetence from their commanders and to interference from men who cared nothing for the lives of the soldiers and civilians affected by the war but only for their own political ambitions or financial interests.

Like most books of history, dry or dramatized, Gods and Generals is ultimately an indictment of war and of those who promote it for their own gain. Such atrocity is always about money and power, and every war is instigated by those who never partake of the dangers but who stir the passions of both sides in order to profit.

Follow the money. Find the hidden source of conflict. Only thus can we end the unnatural and insane practice of war once and for all. (Rant finished.)

Do you read accounts of historical events?