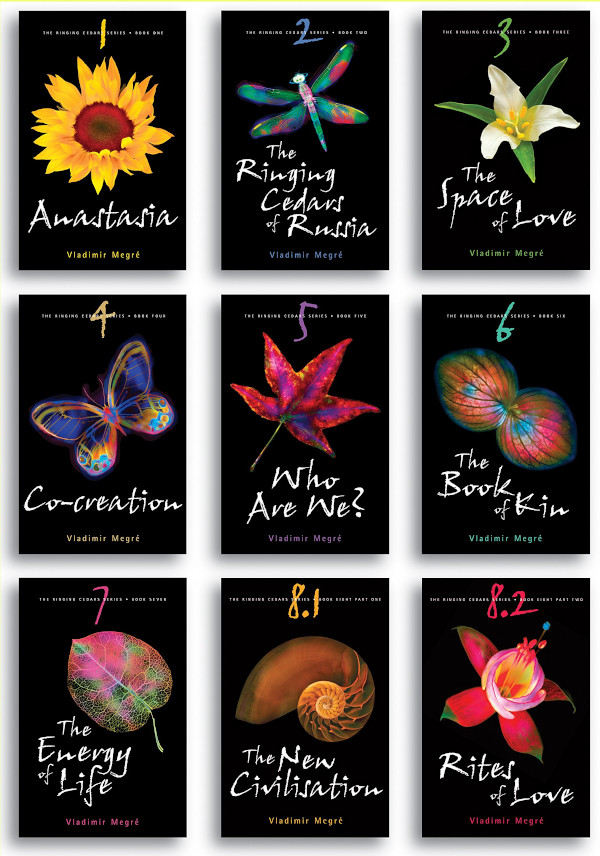 The Ringing Cedars series of nine books has taken the world by a quiet storm that started in Russia and gradually swept across the planet as translations became available. Some prefer the original covers that reflected Russian aesthetics; others are drawn by the simpler bold design of the new artwork shown above.

Vladimir Megré admits to being an entrepreneur, not a writer, and the first books make that clear enough. But his tale of encounters with a mysterious young woman named Anastasia in the taiga, the vast forest that covers northern Russia, is compelling. It is she who instructs him to document what she reveals, and so he embarks on a journey that he could not have imagined: writing and then distributing volume one, literally standing on street corners to sell copies he published and printed with his own money.

Being an entrepreneur and proud of the fact, Megré persevered despite a lack of initial profit, and sales gradually increased and then took off. Book after book he wrote, printed, and promoted. As a result, he prospered. And people began to take the ideas seriously and implement them in their own lives, making “kin’s domains” of their own.

What is a kin’s domain? A small plot of land on which to build a modest home and a garden to grow food, perhaps adding a few domestic animals. The ultimate self-sufficiency.

Expanded, the notion is applied to prison populations as a means of reform, to economics and politics, and to society as a whole. Science and schooling, religion and family are discussed from a novel point of view.

Anastasia even describes how to improve the healthfulness of crops and the best way to procreate for the greatest benefit to the child. People who have taken the advice to heart swear by the results.

The Ringing Cedars books are practical and spiritual explorations that open the mind to new concepts that deeply affect readers.

Would you like a kin’s domain of your own?