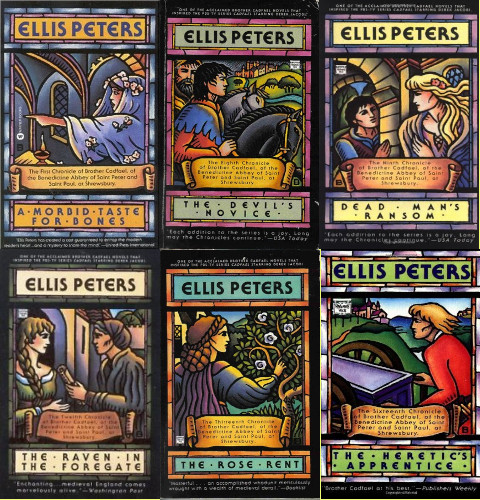 Not precisely Cosy Mysteries, these tales of Brother Cadfael, a Benedictine monk of the 12th century, lack the feverish intensity of modern crime thrillers while managing to be page turners.

Some may consider them difficult to read: Personally, I had to look up many words and found that some were not in any of my dictionaries; I suspect they were Welsh terms, special words of ancient usage no longer included in dictionaries, or just typos (there were a few obvious misspellings―not at all uncommon even in traditionally published works).

But for those with the patience to persevere in the face of such obstructions, and able to guess that a “necessarium” is a toilet room or privy and a “scriptorium” a place to read or write, these tales are positively addictive. No wonder they were translated to video!

In each book, with titles like “A Morbid Taste for Bones” and “One Corpse Too Many,” herbalist and former Crusader Brother Cadfael hunts the truth of a mysterious death, often baulked by members of his order, a local official who wants the matter settled quickly on the assumption that the first suspect is the only possible perpetrator, and by opinion of the local populace too eager to spread misinformation in the form of gossip. And all this against a backdrop of political turmoil during the War of the Roses, when cousins King Stephen and Empress Maud vied for the throne of England.

The historic detail is fascinating, the imagery compelling, the characters true to life, and the twists and turns of the tale keep one reading to the last page. I cannot recommend this series strongly enough.

Have you read any of the Cadfael mysteries?